The temperature was hot and so were the prices at Newbold’s Poll Dorset & White Suffolk Opportunity Stud Ewe sale last Wednesday 2nd March.

This was our first major mated ewe sale. The loss of leased land prompted the decision to reduce ewe numbers to avoid over-stocking. We would like to take this opportunity to thank all bidders and under-bidders for their support.

The sale drew buyers in from around the state as well as from New South Wales and Western Australia. There were 19 registered bidders, resulting in a clearance of 94 ewes and 15 ewe lambs at a $612 average. Seventeen buyers purchased ewes.

“We very proud of the line-up of ewes on offer today. It was both humbling and exciting to see the number of studs here investing in Newbold genetics.” Bill said.

The sale started off with 20 PTIL White Suffolk ewes mated to a variety of sires including two Newbold young rams, rams from Gemini, Glengarry, Woodbridge and Pepperton as well as the well-known sire Pollambi 451/11.

Newbold White Suffolk ewes are bred for high performance. They are an excellent line for type, scale and performance.

The top priced ewe was purchased by Tim Stevenson from Kojonup WA through Elders Roseworthy agent Peter Marschall for $900. He went on to purchase a total team of 16 ewes.

Ashmore White Suffolk Stud, Wasleys SA, was the largest volume buyer in this part of the sale with Brian, Troy and Nette Fischer purchasing 8 ewes to a top of $850 and an average of $600.

Other White Suffolk buyers included Josh Nourse from Saddleworth who purchased 4 PTIL ewes to a top of $500.

The name Newbold is synonymous with “Poll Dorset”, the first ever Poll Dorset sheep having been bred here over 60 years ago. And it was clear to see that the Newbold Poll Dorset genetics were in high demand last week with 89 selling to 15 buyers to a top of $1200 and an average of $650.

The top of $1200 was reached on 3 occasions. John Oswald, Yaninee SA, purchased two of the top priced ewes, both carrying twins sired by Hillcroft Farms 497/13 – world record priced ram purchased for $31,000 by the Meat Elite group in 2014. Mr Oswald purchased 22 Poll Dorset ewes in total for an average of $786. He is a repeat Newbold customer, having purchased several Newbold stud rams previously.

Wayne Burnett from Munyallina Poll Dorset stud, Mount Pleasant SA, purchased the third $1200 ewe - also carrying twins by HF497/13. Wayne was an influential player on the day purchasing 10 ewes to a top of $1200 and average of $785.

Demand for the much admired White Suffolk and Poll Dorset ewe lambs was  restrained, 15 of the 2015-drop ewes sold to a top of $550 and an average of $430. Feedback from buyers after the sale indicated that had these lambs been scanned in lamb the result would have been very different! 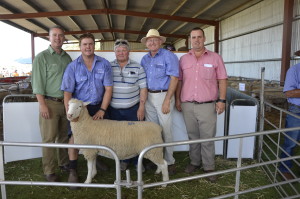 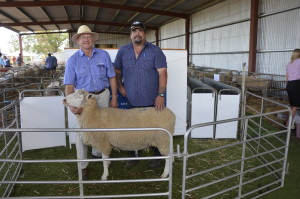