Thank you to all who attended the 71st Annual Newbold On-Property Sale on Thursday 24th September and congratulations to all buyers.

The impetus as Most Successful Exhibitor at the Adelaide Royal show continued at Newbold’s 71st annual sale. Strong demand was evident from Lot 1 with phone bids coming from interstate. Newbold 108/14 was eventually purchased for $6400 by Tim & John Hedges, Bugle Downs, Keith SA. Tim & John also won another bidding duel for Lot 2, Newbold 564/14. Selling for $7000, N564 was the highest priced ram of the sale. These two rams were the winning Lamb Production pair at this year’s Adelaide Show. 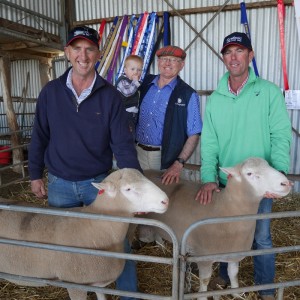 There was strong demand for the stud ewes with 4 local and interstate buyers. Top price ewes sold to Bsarma Farming, Minlaton at $440. Robert & Michael Cook purchased 6 Newbold ewes at an average of $363. New breeders DJ and NF Harrington, Bendigo purchased 4 ewes at $330. 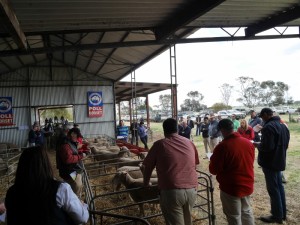 The ewes go under the hammer.

With thanks to all bidders and underbidders as well as the Elders Roseworthy team for faciliating the sale.