Thank you to all who attended the 72nd Annual Newbold On-Property Sale on Thursday 22nd September and congratulations to all buyers.

Rams met strong demand and producers valued the excellent Lambplan ASBV’s available. It was obvious that Newbold’s breeding emphasis for commercial profit drivers is highly valued by commercial lamb producers. Newbold has continued its success in lamb production classes in the show circuits, this year most notably the winning the Interbreed Championship Lamb Production Pair at the Adelaide Royal Show.

Poll Dorset Flock rams topped at $1800 with the first 30 rams all selling for greater than $1000. Later sales provided a great buying opportunity to average prices.

The outstanding line of White Suffolk rams sold strongly to a mix of repeat and new clients. A number of rams made the top price of $1600. Bruce McCallum put together a magnificent line of 7 rams. Boundrina Pty Ltd another great team of 13 rams. Other strong buyers were Tom Quinn, Mich Dittrich and Chris George.

Dan Robinson from Kangaroo Island purchased all the Texels and Texsets for use particularly with his maiden ewes.

With thanks to all bidders and under bidders as well as the Landmark Gawler - Riverton team for facilitating the sale. 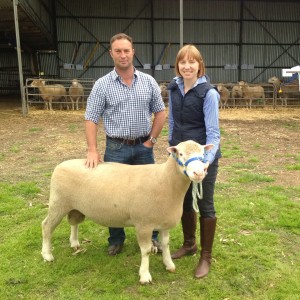